(Updated on February 28th, 2016, to correct spelling errors and clarifications, and to add section about single threaded scanning)

HBase has many options to encode or compress that data on disk.

In this excellent blog post Doug Meil and Thomas Murphy outline the effects of block encoding and compression on the storage footprint.

In this post I will explore the effects of encoding and compression options on (read) performance. I performed the Scan performance tests with the excellent Apache Phoenix  the relational layer over HBase. The Get tests use a straight HBase client, without Phoenix.


In short:
Block encoding refers to ability to encode KeyValues or Cells on-the-fly as blocks are written or read, exploiting duplicate information between consecutive Cells. The main advantage is that the blocks can be cached in encoded form and decoded as needed in a streaming way. The encodings used most commonly in HBase are FAST_DIFF and (to a lesser extent) PREFIX encoding.

Compression here means full compression of HBase blocks using SNAPPY, GZIP, and others. Newer versions of HBase have the ability cache block in compressed form, but I did not test this here.

(Compression and block encoding for HBase are described in more detail here.)

For my test I created Phoenix tables of with the following schema:


Then I seed the pk from a sequence, and v1/v2 with random values like so:

followed by a few (doubling the size of the table each time):

upsert into test select next value for pkey, rand(), rand() from test;

This data set, except for the monotonically increasing key, would not compress well.

With that I created tables with 32m rows, or 128m Cells altogether (including the one that Phoenix creates for book-keeping), on a single machine.

Let's first look at the footprint on disk:

So, the first take away: You have to use some kind of compression or encoding. Since every column needs to be stored as its own cell it clocks in with about 24 bytes per column uncompressed - or about 100 bytes per "row". (In a relational database with a dense row format that entire row would only take about 12 bytes.)

I tested the following four scenarios:

Now let's do some scanning

select /*+ NO_CACHE */ count(*) from test;
(This will actually issue 11 scan requests to HBase in parallel)

I cleared the OS Cache with 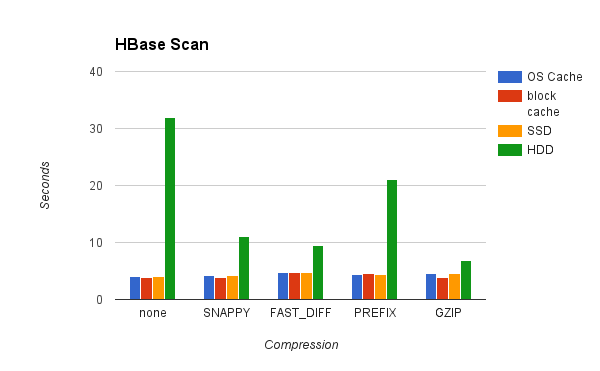 We can see that reading from spinning disk is (not surprisingly) dominated by the amount of data to be read. Extra CPU time consumed by compression is negligible, we are clearly IO bound.
We also see that in all cases - even GZIP - HBase was able to push the drive close to it's limit. In fact in all cases I saw 90-95MB/s read from disk, the performance gain from compression is close to proportional to the compression ratio.

Let's look at the same data without the HDD numbers to see better what's going on: 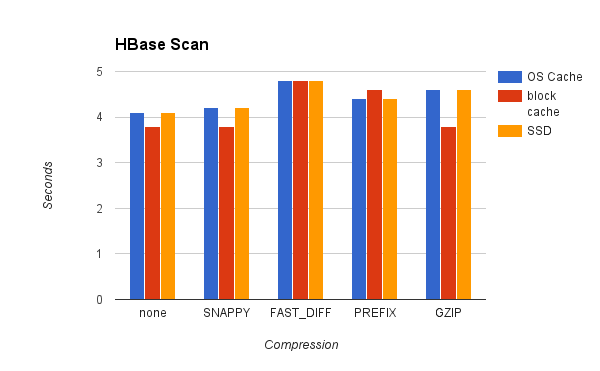 We also see that for Scans the block cache has no/little advantage over the OS cache, or even reading straight form SSD - and in fact HBase wasn't able to keep the SSD fully busy. In other words for SSDs HBase scans are CPU bound. This is interesting, I will also investigate this part further.

So use FAST_DIFF only when you expect your working set to fit in the aggregate block cache when compressed, but not uncompressed.

We can now also see the relative CPU cost of the compression. FAST_DIFF is actually worst(!), followed by GZIP, PREFIX, and then SNAPPY, which is most efficient.
GZIP consumed to most CPU to decompress a block, but after decompressing a block scanning goes through the block without any extra work.

Since for scans the HBase block cache generally does not buy much over Linux' disk block caching ("OS Cache" in the graph) as we're CPU bound anyway; in these situations it might be better to disable cacheBlocks (setCacheBlocks(false)) on the Scan object - even when the entire scanned data would fit into the HBase block cache.

Note that Phoenix uses parallel scans across regions and uses equal-width "guide posts" to guide how Phoenix should parallelize the work across HBase region servers. In the Scan examples Phoenix chose 11-way parallelization to execute the queries. I have since added a SERIAL hint to Phoenix to force serial execution of a query. See PHOENIX-2697.

How does performance look like when all scanning is single threaded? 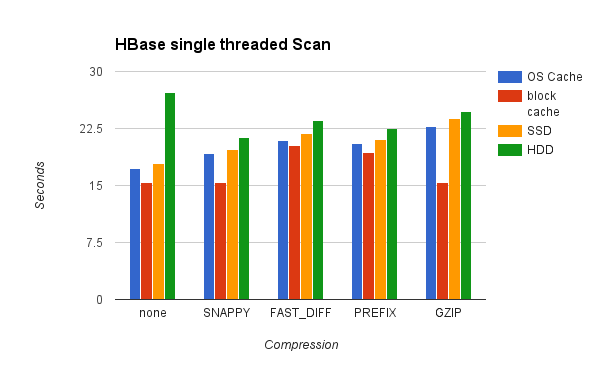 Now this is interesting. Without compression we still run into the spinning disk limit throughput limit. Everything else is mostly CPU bound.

In the next chart I mapped the scan throughput out of the OS cache seen by 1 thread and by 11 threads. (I used the OS cache, and not the HBase block cache, as this shows the internal end-to-end performance of HBase.): 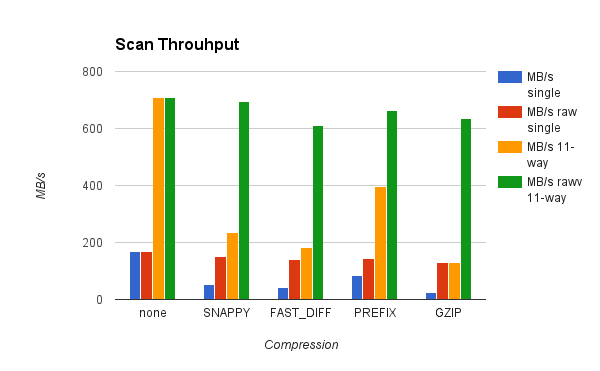 We run into some internal HBase/Phoenix limit around 710MB/s.

In order to put this into context... According to spec this machine has 4 DDR memory channels for a total maximum bandwidth of 51.2 GB/s.

I wrote a simple bandwidth tester in C++. It allocates 1GB of memory and then accesses it sequentially as bytes or as 64bit longs. (for good measure I wrote the same in Java, and came to the same numbers, within 10%). Please note that I am not hardware guy.

Here's what I measured (bandwidth, GB/s):

So the HBase numbers are quite a bit lower. We see that the maximum throughput (710MB/s) is close 4x the single threaded throughput (168MB/s), indicating that this is probably related to memory throughput and not CPU cycles (we should have seen an 11x speed up, the machine has enough cores).

Now, this is from the Linux block cache, so we need account for the fact that the blocks are copied at least 2 times (into a direct byte buffer, from there into a byte[]), but since the block cache is only marginally better, this looks to be all internal Phoenix and HBase friction.


OK. That was scanning. Let's try some random gets.


I wanted to explore the decompression cost more. Here I wrote a little tool that issues 1000 random gets. Now each get will incur a block read followed by decompression (if not in the block cache), or a seek + decoding.

The numbers from HDDs are absolutely dominated by the seek time. In all cases this was close to 6.2s, which is close to what you would expect from doing 1000 seeks in 7200rpm drives (actually you would expect 8s for 1000 Gets, presumably it's a little faster, since some gets might hit the same blocks again).
Use SSDs for random Gets, or make sure that your working set fits into the OS cache or block cache. Otherwise each Get will require HBase to perform a disk seek (about 4ms for 15k drive, 8ms for 7.2k dive, 12ms for 5k drive). 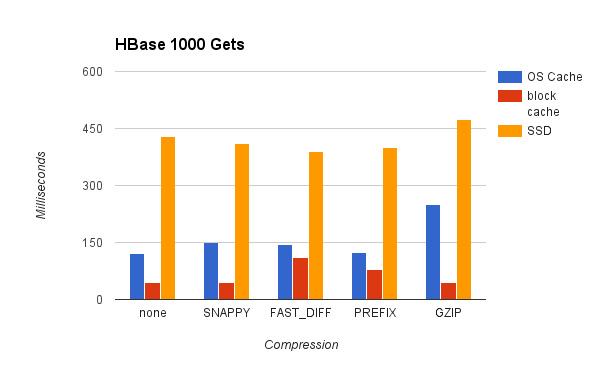 So here we see the cost of the decompression again. This time HBase needs to load and decompress a block for each get - unless that block is found in the HBase block cache. We can estimate that the "seek time" on the SSD is about 0.4ms, or that the drive can do about 2500 IOPS (which does seems low).

We also see that FAST_DIFF is not doing as well with the data in block cache, again because it's the only scheme that stores blocks in their compressed form - and the cost of decoding is proportional to the number of Cells traversed.

When the data is on SSD or in the OS Cache, we do see that encoders are doing slightly better. They do not have to decode the entire block, but only the portion needed to decode the Cells we're interested in.

Most prominently for Gets we do see the value of the OS Cache and especially the HBase block cache - assuming the working set will likely fit into the aggregate block cache across the cluster.

What I didn't test:

What I also didn't test: