Experiments with HBase, Phoenix, and SQL at Scale

For a short time we have a large Hadoop/HBase/Phoenix cluster at our disposal before it will be handed off to its designated use. Many 100's of machines, many 1000's of cores, many dozen TB of aggregate ram. (not at liberty to state the exact size of the cluster, nor its exact H/W configuration).

We decided to use this opportunity to perform some semi-scientific tests of Phoenix and HBase at scale to see how much of the hardware we can actually utilize and drive for single queries.

For that we loaded the TPC-H LINEITEM table with 600m and 6bn rows, respectively.

The 600m table uses about 372GB of data (176GB on disk after FAST_DIFF encoding), the 6bn row table measured 4.3TB (1.65TB on disk). While not a lot of data at all for this type of cluster (it all fits easily in the HBase block cache) it none-the-less lets us gauge how Phoenix and HBase can scale their workloads across the cluster.

We performed the following queries over the data:

First we varied the number of a driver threads on the client for the first query.
Notice that we can scan through 6bn rows, or 4.3TB of data in 6.55s. 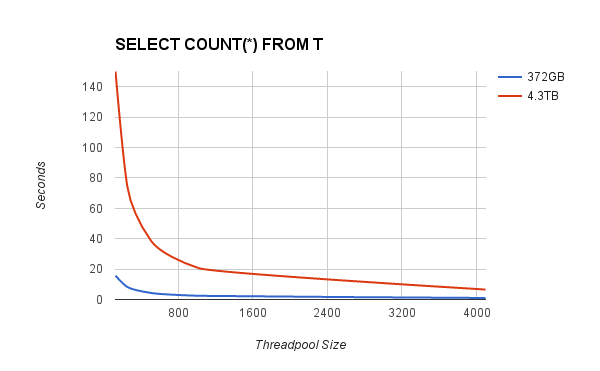 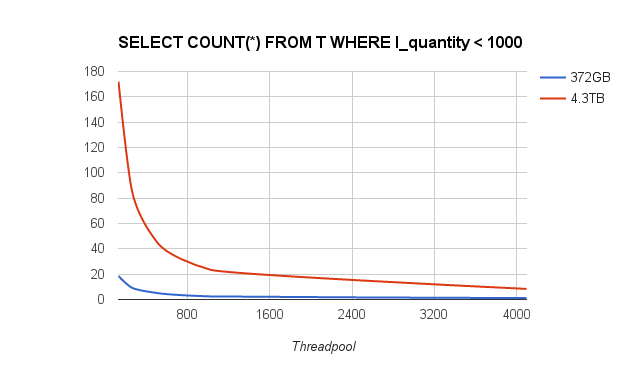 Next we performed sorting. As soon as the query returns the first result we cancel it.
(note that with an added LIMIT clause Phoenix does an O(N) scan, instead of a O(N*log(N)) sort).

As mentioned, a single client can drive the cluster to sort 4.3TB in 26.4s! 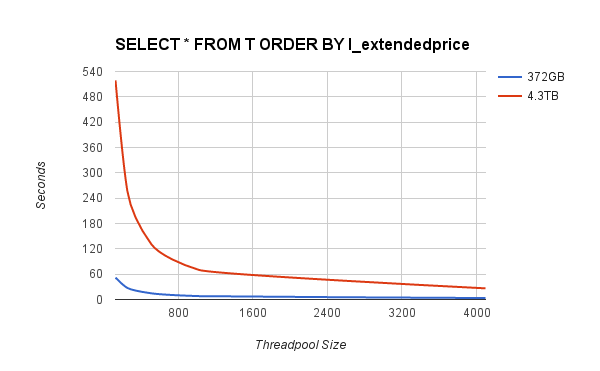 Joins... This time fixing the threadpool size around 4000, and varying the number of a join keys. In the 128k case we performed 786 trillion comparisons of a BigInt value in 26s 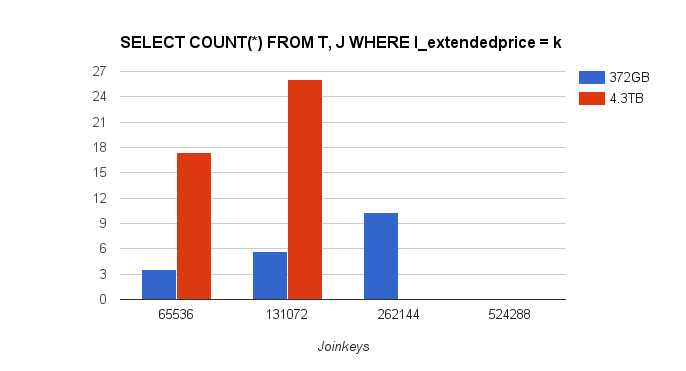 Lastly, we also created LOCAL indexes on the data. Due to their local nature they are created in just a few second, and even at many 1000 regions still were effective to reduce query times significantly.

Index creation on the 6bn row/4.7TB table took almost exactly 1 minute.
It brought a scan selecting a few 1000 of the 6nb rows from 8s to about 10ms - and note that this is a table with many 1000 regions, where each region needs to pinged with "do you have these keys?"

Joins naturally do not scale well. Phoenix now has a merge join option, which sorts the relations at the servers and then performs a final merge on the client. At the sizes we're talking about this can't be done realistically. Perhaps joins with highly selective filters will work, something we'll test soon.

There is a lot of work to do. In order to be efficient Phoenix/HBase need to work on denormalized data - which should not really come as a surprise.

So we measured joins only for situations where they can be executed as a broadcast-hashjoin. With default configuration this failed at 2^18 (256k) joins keys.

LOCAL indexes of a table are mixed in the same single column family. Creating many of them make that column family the dominant one in terms of size, driving HBase's size based split decisions.

Unlike MapReduce, Spark and some distributed databases, Phoenix has no resource allocation or restarting framework, other than what's provided by HBase. Phoenix is not useful choice for queries that run for more than (say) 1h, or where partial failure on some machines is likely.

To drive large queries you must configure the Phoenix client accordingly:
Increase phoenix.query.threadPoolSize (1000, 2000, or 4000) and phoenix.query.queueSize (maybe 100000).

Semi- (or un-)scientific; more of a qualitative tests whether a larger cluster can actually be utilized to execute a single query. Phoenix/HBase do quite well in terms of scaling. We will continue to do more tests and drive the fixed cost down, to allow Phoenix/HBase to utilize the machines better.

We'll have this cluster just a little bit longer. More to come. And if you have any other Phoenix/HBase testing you'd like us to do, please comment, and I'll see what we can do.